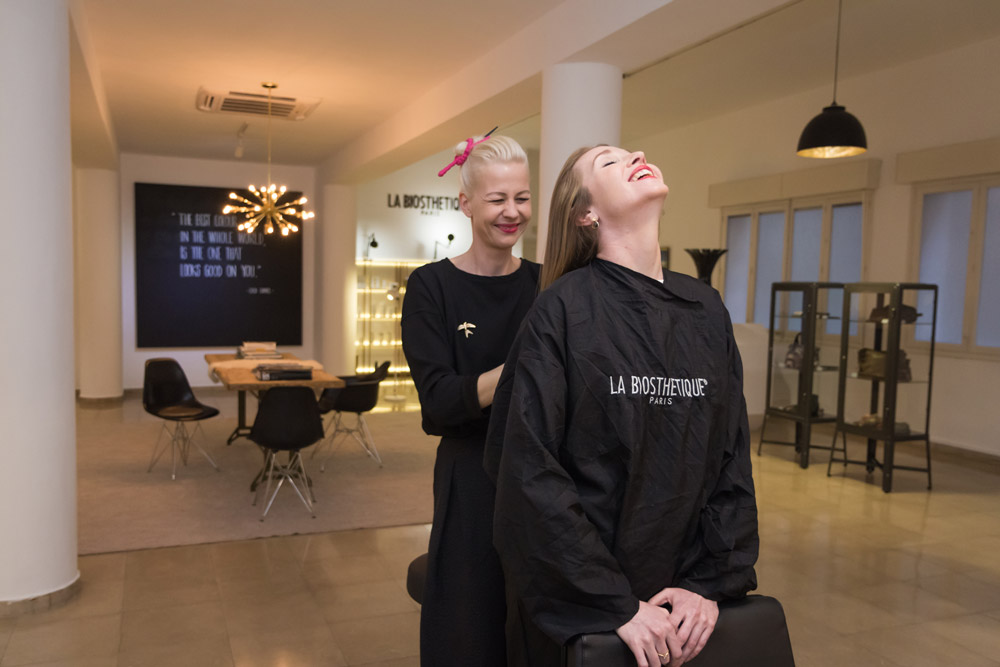 The fashion editor and blogger Francina Galmés Meliá (chlochic/ELLE.es) wrote a charming article about us for ‘ENKI magazine’. Francina describes how she experienced her visit at our hair salon.

It was a great pleasure meeting, working and exchanging warm-hearted moments with Francina. We really had a fantastic time together. I think the pictures and the video speaks for itself.

In the hands of ‘Silke von Rolbiezki Coiffure’

Francina was so kind to allow us to publish her words in our blog, the same text which has been published in april 2014 in the ‘ENKI Magazine’. If you understand spanish and you are interested, here is the original text Chlochic y la revista ENKI en las manos de Silke von Rolbiezki Coiffure.

Enjoy the wonderful pictures which were taken especially for this article. On the end of this post you´ll find a lovely videoclip. Absolutely worth seeing! The ‘making-of-video’ to the photo shoot

Take a look behind the scenes and see how the photo production for the ‘ENKI magazine’ was realized. Guest: Francina Galmés Meliá, lawyer in Palma de Mallorca, fashion blogger for chlochic/ELLE.de and editor for ENKI magazine, in charge of fashion and beauty.
All pictures were taken on behalf of ENKI magazine. A selection of those pictures were published on issue no. 14 in april 2014, together with the original text. Host: Silke von Rolbiezki, hairdresser, hair stylist and owner of ‘Silke von Rolbiezki Coiffure’ in Palma de Mallorca – has been involved and connected for more than 18 years in the high end hairdressing industry. She has perfected her skills over time with top hair stylists in Germany and Spain. In addition to cutting and styling, Silke is very well known for her extensive expertise in hair coloring. Photos: Soravit Lertphiphat Photography, Palma de Mallorca
All pictures were taken on behalf of ENKI magazine. A selection of those pictures were published on issue no. 14 in april 2014.

What experience did you have at our hair salon?

Have you been visiting our salon already? What was your experience at ‘Silke von Rolbiezki Coiffure’?

If you find this article helpful, please feel free to share it on Facebook or other social networks.